Two weeks ago was a holiday for some very special women in my life: Mother’s Day! While this holiday can be particularly difficult for me as I have a rather…difficult…relationship with my own mother, this year I decided to be proactive and do something I love. I found a new project that would serve as an excellent gift. They are personalized coasters. I found the project here. While I was nervous to take on a project I had never done before with materials I’d really never heard of, I was excited! Something completely new that I knew the moms in my life would appreciate. #Letsgo

I was brilliant enough to take a few pictures before I started. Which is awesome to look back on now and laugh at how I ruined the first few sets! 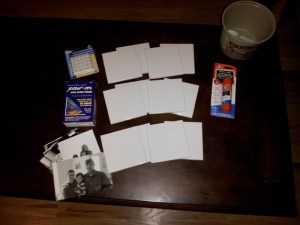 All the materials I needed and complete blind excitement!

Step one: print awesome photos. I chose to do these in black and white, but I did color ones in later attempts, and they turned out really well. Just make sure the photos are a good quality. If they’re blurry on your computer, they’ll be worse on the coasters.

Step Two: purchase your materials. The tiles I bought were $.16 each at Home Depot, which is also where I bought the felt pads you need to keep the tile from scratching any surfaces you use the coasters on. I bought the resin (the most expensive part) from Michael’s for $13ish and the super glue for $1. You’ll also need a mixing bowl, measuring cup, and stirrer you never plan on using again. I used an old butter bowl and a painter’s stirrer (also from Michael’s for $1).

Step Three: Cut the pictures from 4×6 to 4×4. The important part here is choosing pictures that you can cut extra space out of. I tried repeatedly to manipulate some close-ups to fit the 4×4 square and I failed repeatedly. The tiles measure 4.25×4.25, but you want the pictures at 4×4.

Step Four: Clean the tiles of any dust and super glue the pictures to the tiles. Be careful for fingerprints. If you touch the glue and then the picture, you’ll be able to see the fingerprints under the resin. Also if you’re gluing them all on the same surface, if you get glue on the table, turning the next picture upside down to glue it on the same table will undoubtedly transfer glue to the picture.

I hope all these details are helping. Please try to envision my frustration as every warning or pointer I give you was a mistake I made along the way!

Step Five: After all of your pictures are glued, mix the resin. The box comes with two bottles, the resin and the hardener. It is very important to mix them in exactly equal parts. I used a 1/3 cup of each. They need to be mixed VERY well. The instructions in the box explain exactly how to use it. I’m pretty sure it says to mix it for at least 2 minutes, turning the container constantly so that you get the mixture off the sides of the bowl. If you see tons of bubbles, you’re doing it correctly.

Step Six: Apply the resin. This is the only time I suggest stopping the “assembly line” method of doing things. You’ll want to start-finish each tile before starting a new one. Apply the resin directly to the picture (a little goes a pretty long way). Spread the resin evenly around the picture. If it goes off the edge, it will discolor the side of the tile, but it doesn’t diminish the final quality. If it goes too far off the edge and dries that way, it’ll be a permanent part of the coaster. (Logan is sawing off one of these for me)

Step Seven: Blow any remaining bubbles out with straws. Carbon dioxide pops the bubble, not heat, so don’t think you can skip ahead with a hair dryer. The lady I got this from used a blowtorch on super low settings. I have no such equipment. Tip of the day: switch straws often. Any residual liquid that passes through the straw will discolor the photo.

Step Eight: Let the tiles dry. The resin takes 24 hours to dry, but 72 hours to harden fully. That means you need to put them in a DUST FREE environment for 3 days without touching them. Make sure any visitors/residents of your home know where you put them.

This is where my fun came in! We have a dog named Charlie who is the sweetest giant in the world. He’s six months old, weighs 55+ pounds, and sheds like CRAZY. The first batch of coasters I made, we left on our dryer. First thinking that the heat might help them dry faster (inaccurate) and second thinking it was high enough off the ground that Charlie’s hair would not be an issue (inaccurate). Around hour 36 my impatience got the best of me and I had to see if they were dry. They weren’t. First one ruined with a fingerprint, dang. Then I started to notice the Charlie hairs in the resin. Trying to pull them out left fissures in the resin. Tiles 2 and 3 ruined, dang it! After letting the full 72 hours pass, I finally noticed tiny pink dots in some of the pictures. Logan and I decided that they were the result of droplets that came out of the straw when we blew the bubbles out. Tiles 4, 5, and 6 ruined, damn it.

Attempt Two: Repeat steps 1-8 minus all the mistakes. This time I cut open an empty soda box and put each of my coasters on wax paper inside. Then I taped the entire thing shut ensuring that no dust invaded my lovely coasters. Unfortunately, Logan was not home when I made this wise decision and I forgot to warn him. Oops. When he got home and went to take the trash out, he picked up the soda box, turned it upside down and asked if he could throw it away. I cried. Probably a bit over-dramatic, but I worked so hard to make sure everything went perfectly with these and they were ruined 10 minutes after I’d finished. Tiles 7-13, RUINED. DAMN IT.

At this point, my darling sister decided she wanted a set to give to her MIL for Mother’s Day, so I went out, had new pictures printed, bought all the materials all over again, and decided that I was making myself some for all the trouble I was going through!

And finally, after several failed attempts, I made a product I was proud of! Here’s hoping my pointers let you have an easier time of it. It’s really a fun project despite all of my set-backs I would still do it again. And probably will since I have leftover tiles and resin. As always, post any comments, suggestions, questions, or stories of your own! 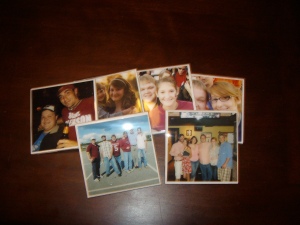 A color set for Logan and I 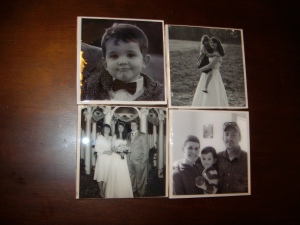 The set for my mom. Sorry for spoiling the surprise if you’re a blog reader. (She won’t get them until mid June) 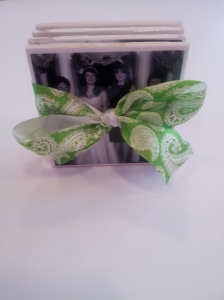 The finished product for my MIL. In love with this ribbon!

The set for my sister’s MIL.

Older: We just met, and this is crazy